The Benefits of Peer-to-Peer Networks – A Personal Story

My experience with NDIS began in 2015. Living in the Perth Hills meant that I was in the zone for the federal NDIS trial site. The beauty of government assistance schemes is that they really can help. The downside is that the very nature of governmental anything is that it comes with an awful lot of jargon and on top of that lengthy and tedious procedure.

In 2012, after living and working in the financial sector in the United States for 22 years, I returned to Australia. I went from one country where capitalism is king and no public healthcare system to Australia that boasts a welfare system that is admired the world over.

I was told there was support, funding, and opportunities to be had.

So here I am in the Perth Hills completely in the dark about what was on offer and with no idea how to get it. I was depleted emotionally, physically and financially. My spirit was broken.

Through word of mouth I was given Bronia Holyoak’s name and number. Bronia is the CEO and creator of Valued Lives, she is also the person who kick-started the Peer-to-Peer Network in Western Australia.

Bronia gave me the phone number of Margo McAdam, who is the coordinator of the Perth Hills Peer-to-Peer group (“P2P”). She and her husband Austin picked me up the following Monday and jammed me and my walker (I was not in a wheelchair at that stage) into their tiny red car. They took me to my first P2P meeting. 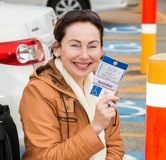 I was accepted by the P2P group immediately and felt an overwhelming sense of relief and belonging. I laughed a lot that day, my sense of humour and hope restored.

P2P empowered me to engage with the NDIS as a self-managed participant.  I now have the confidence to create my own NDIS plans. I can tell you that after nine plans I have encountered many hurdles. Hurdles such as; frequent policy changes, inconsistent advice, new regulations. These are the kind of obstacles that have driven many people away from the NDIS system.

My involvement in the P2P group means that not only do I overcome challenges, but also as we share our many varied experiences, we learn from them collectively. The spirit of P2P is to candidly, but confidentially, share our experiences in dealing with the NDIS, both good and bad. We do this to benefit the whole group. Together we have a bank of knowledge with which we have faced common setbacks such as plan appeals and funding cuts. We are now all better informed about the processes of a complex system that is in a constant state of flux. 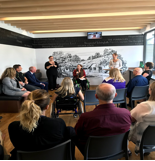 These are the people who know that home modifications are more than a railing in a bathroom, but that if you don’t ask the NDIS the right way that is all you are going to get.

This practical application of NDIS is something my P2P group absolutely understands.

I was finally able to customise my plan in a way that gave me the tools I needed to not just survive, but to flourish. I am now empowered in a way that I am able to lend the weight of my experience and knowledge back to the wider community.

This year I have had the opportunity of becoming the media representative for National Disabilities Services  (“NDS”) for initiatives such as Changing Places (photo with Minister Dawson), ACROD, and Companion Cards respectively.

This involvement lead to an invitation from the Shire of Mundaring to join the board of Inclusion and Disabilities Access Advisory Group (“IDAAG”).

I was a member of MSWA when the NDIS rolled out. As such I was able to use my background in finance to give logistical support and guidance to MSWA as they came to terms with their role as an NDIS provider.  In 2017 I was nominated as an Ambassador for MSWA. 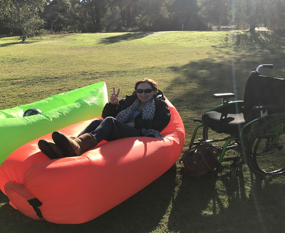 In July this year I became the first WA member for NDIS’s Participants Reference Group (“PRG”). When I introduced myself to the other members. I told them about my Perth Hills Peer-to-Peer Network. This topic sparked a lot of interest. I am hopeful, and would not be surprised at all if P2P groups become a national phenomena. I certainly hope so.

My P2P group has become a crack team of navigators, translators, supporters, comrades and allies.  They know the unknowable. What I mean is they are experts on an ever-changing system. How do they do this? By asking questions and being proactively involved with the NDIS.

The P2P has a voice and as a movement, is building momentum with every new voice added. The spirit of inclusion and integrity, the respect and validation of people’s privacy, as well as their lived experience is having a snowball effect.

We aren’t a bunch of couch critics. We know how dynamic and yet inflexible at the same time the NDIS can be. We have lived it, some of us first hand and others by proxy for their loved ones. We know it is not a perfect system, but we are devoted to its improvement as well as helping people to get the most out of it.

It is with a heart full of gratitude that I recognise the invaluable skills, passion and drive with which Bronia Holyoak and Valued Lives have established the P2P Network across Western Australia. Her devotion to the cause is reflected in the professionalism and care with which her team conduct themselves. A credit to a strong leader and careful delegation.  Thank you Bronia and the Valued Lives team.